The Story Behind
SHEREN PLUMBING, HEATING AND COOLING

OUR STORY SETS US APART 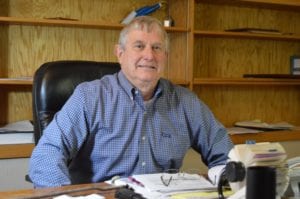 Jerry Sheren was born and raised in the Hannah/Kingsley area and attended St. Mary’s School through high school. His great-grandparents from Germany homesteaded in the Kingsley area. Jerry enlisted in the Air Force right out of high school at the beginning of the Vietnam War. Honorably discharged four years later, he became an apprentice plumber in Massachusetts under the GI bill. He started a family there and they moved backed to Traverse City in 1975. Two years later, he started Sheren Plumbing, Heating and Cooling.

Along with his military experience (that introduced him to the field), Jerry has the licenses necessary to run a business (master plumbers, plumbing contractor, mechanical contractor and boiler). After more than 40 years of hard work and perseverance Jerry built the success that Sheren Plumbing, Heating and Cooling is today. With an eye to the future, Jerry is looking forward to semi-retiring to spend more time with family and at the family cabin in the Upper Peninsula of Michigan.

“Family is very important at Sheren and we have a culture conducive to our employees and their families.”

What’s unique about Sheren Plumbing, Heating and Cooling is our ability to start a project — whether it’s a simple furnace filter replacement or a complicated design/build for a commercial building — and provide 100% satisfaction.

“In order to continue growth for our company, I purchased Great Lakes Plumbing & Heating, located in Petoskey in August 2016.

I wanted to bring our high level of service to even more customers located in the northern parts of the Lower Peninsula of Michigan.

Our Traverse City location is the corporate headquarters with Petoskey having its own office.” – Jerry Sheren

Sheren Plumbing, Heating and Cooling also believes in giving back to the communities in which we live. Both locations sponsor various non-profits throughout the year, such as Paper Angel program through Child and Family Services, Freedom Builders, and the Humane Society.

Give Us A Call Today!